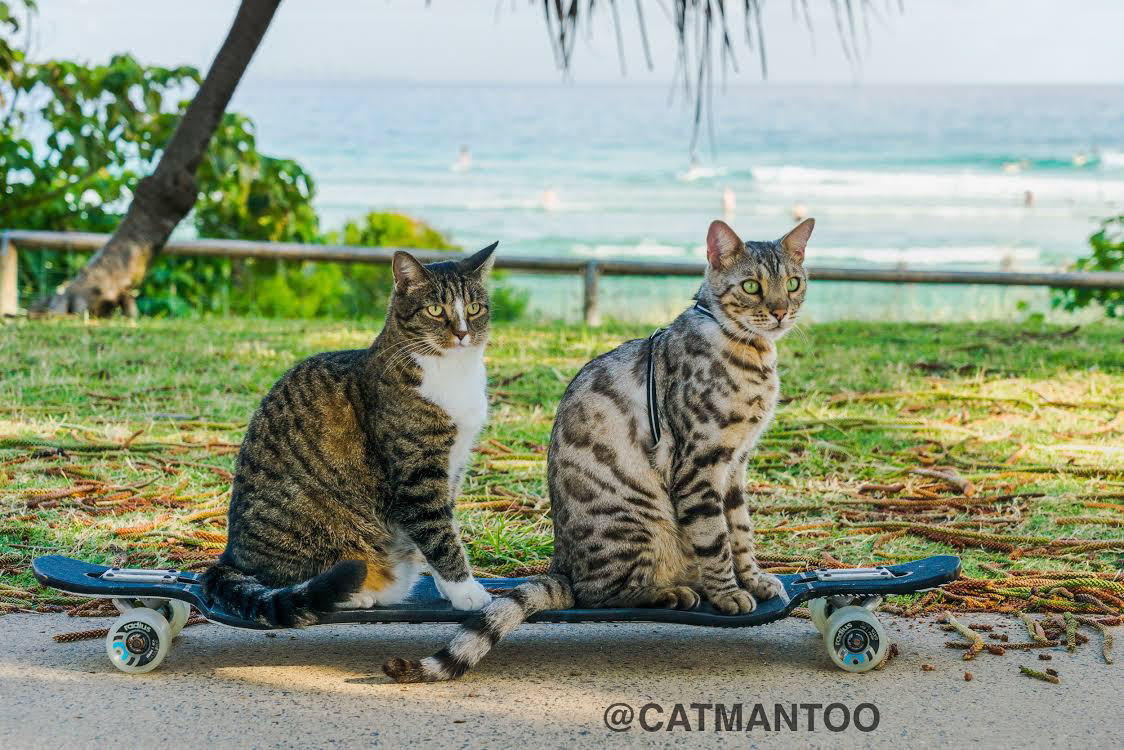 Two of Australia’s most popular citizens have four paws and fur, but their lives started as anything but glamorous. Didga and Boomer have a true rags-to-riches story: from rescue kittens to two of the internet’s most famous kitties. They’ve starred in music videos and been featured on the local news with their “pawsome” skateboarding skills, and they draw crowds everywhere they go.

“The viral videos we make help attract attention to our social media sites, so we can show how awesome cats — especially rescue cats — can be,” Didga and Boomer’s owner, Robert Dollwet, told Adventure Cats.

In fact, Dollwet says that promoting cat adoptions is the reason why he shares his cats’ videos with the Internet.

“Adopt, don’t shop,” he said. “Spay and neuter. Don’t declaw a cat, and don’t let them roam. If they go outside, they need proper training and leashes.” 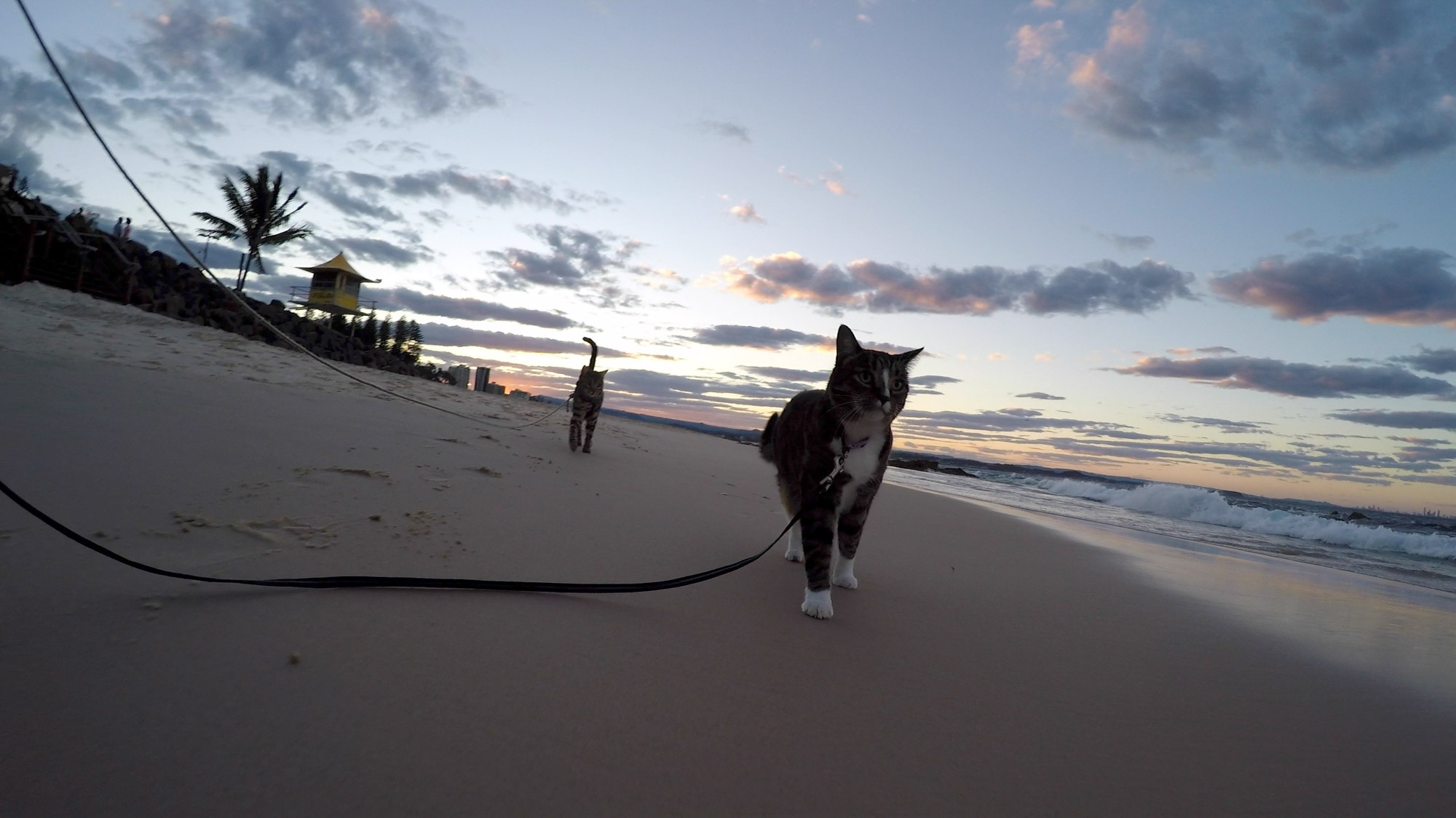 Didga and Boomer were both very confident kittens, and their leash training began in the comfort of their own home, working to right outside their front door and slowly moving forward.

To get the cats used to the car, Dollwet took Didga and Boomer to the same place every day — and sometimes twice a day — to desensitize them to travel. Once they became confident and comfortable there, they quickly adapted to other new environments. 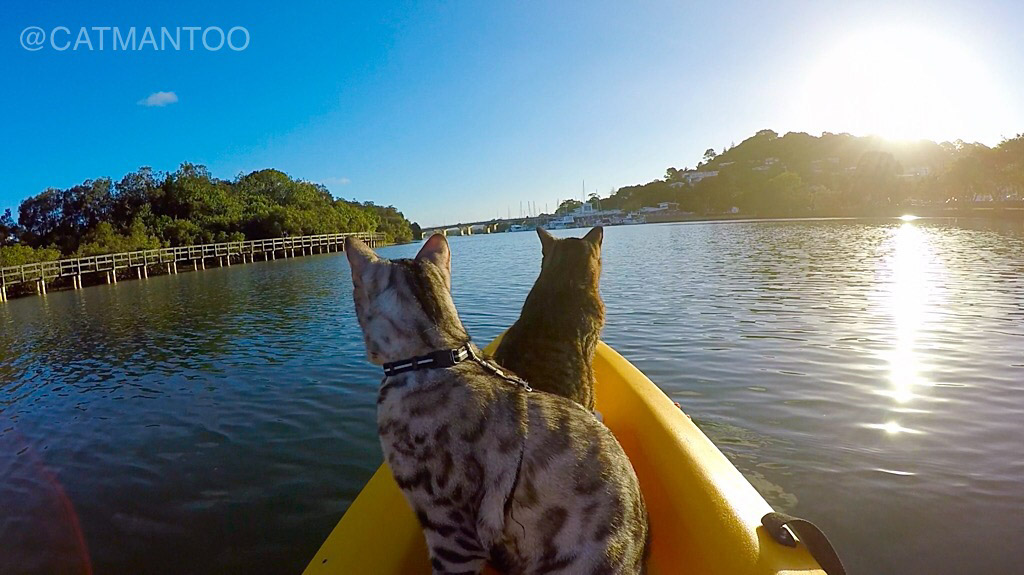 During all their excursions though, Didga and Boomer are always equipped with harnesses and leashes. However, Dollwet says that 5-year-old Didga has earned the right to go off-leash occasionally because she always comes when called. Little brother Boomer still needs the leash, but he thrives on his outings.

“It would be cruel to not allow him some time outside [to experience] the wilderness,” Dollwet said.

Didga and Boomer love going to the beach most, where they play in the sand, walk along wooden fences, explore the dunes or simply hang out in the sun. The kitties play so hard that they sleep through the night, which is quite uncommon for cats. 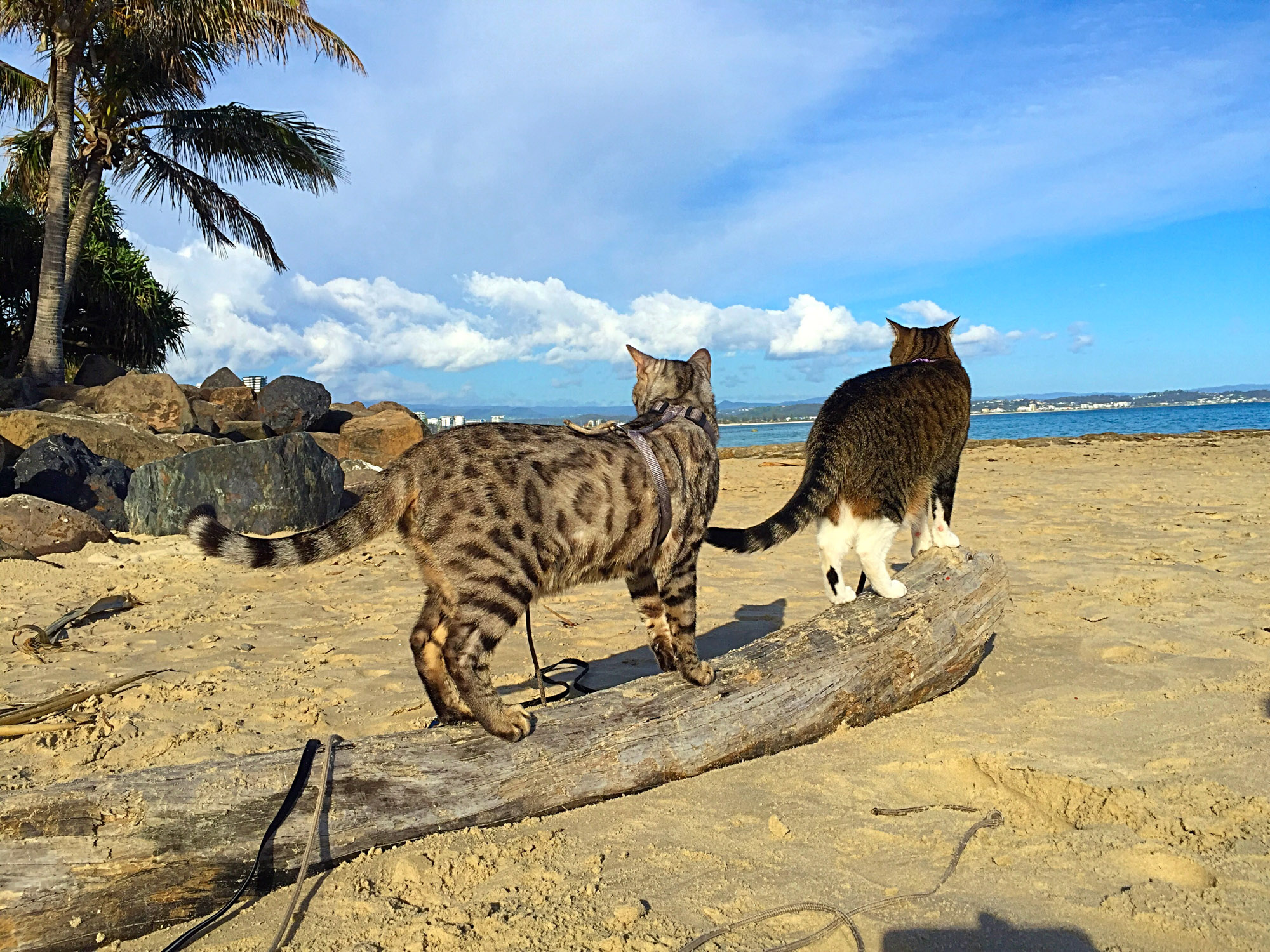 Their afternoon treks to the beach help both felines and human relax after hours of video editing and making social media posts, but walking two cats does tend to attract attention.

In fact, it’s not uncommon for the local news to grab shots of the kitties skateboarding or for people to travel across the country for a chance to snap a selfie with the feline stars. Even those who don’t know or recognized the pair are captivated by Didga and Boomer.

“It’s a very social thing to have a cat out in public,” Dollwet said.

Want to train your kitty?

Dollwet has extensive training videos for both our feline friends and our canine companions on his website, MalibuDogTraining.com, and with 35 years of animal training and behavioral experience under his belt, he certainly makes it look easy.

Dollwet encourages owners to play to their cat’s strengths and move at their pace, no matter how slow it may be. Rushing the process or pushing your cat outside of his or her comfort zone could result in injuries or long-lasting fears, and it cold also damage your relationship with your cat. So take it slow and keep training sessions short and positive.

For more training tips, read our article on clicker training, and check out the video below for more tips on how to enhance your kitty’s life — both indoors and out.